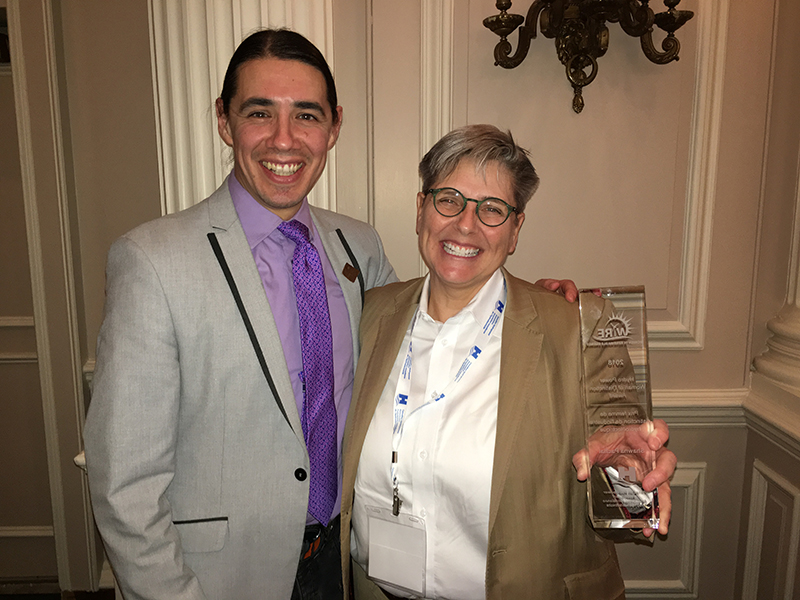 On November 21, 2018, the Women in Renewable Energy (WiRE) and the Canadian Hydropower Association (CHA) recognized Shawna Pachal (Acting Chief Finance and Strategy Officer for Manitoba Hydro) with the new Hydropower Woman of Distinction Award at the annual CHA forum in Ottawa.

The WiRE Woman of Distinction Award celebrates professional women working in energy who go above and beyond business-as-usual. As the first recipient to receive the award for her exemplary leadership in the renewable energy sector, Shawna believes women are significantly underrepresented in the industry.

“Targeted trades programs, work re-design, and cultural paradigm shifts are a few of the areas where change is needed,” says Shawna. “My ongoing commitment is to consciously promote inclusion and fairness to women and marginalized people in the hydropower industry at every opportunity.”

Shawna joined Manitoba Hydro in 1985 and has 33 years of technical, managerial, and executive experience in utility operations. Before becoming Acting Chief Finance and Strategy Officer for Manitoba Hydro, Shawna was the Senior Managing Director of Manitoba Hydro International Ltd. (MHI), which provides consulting, training, and management services to clients around the world.

“I have been fortunate to work for a great company like Manitoba Hydro that has provided me with opportunities to contribute in all parts of the hydropower sector, both domestically and internationally,” says Shawna.

Throughout her career, Shawna was an executive member on the Wuskwatim Keeyask Training Consortium Board, the Keeyask Hydro Limited Partnership Board, and a member of various committees at the Canadian Electrical Association, CHA, and International Hydropower Association.

“Working with an amazing team of Indigenous visionaries and Manitoba Hydro colleagues, I was one of the leaders involved in creating and implementing a new approach to Indigenous relations,” adds Shawna. “We worked closely with the affected communities and developed new hydro projects as partnerships with joint ownership.”